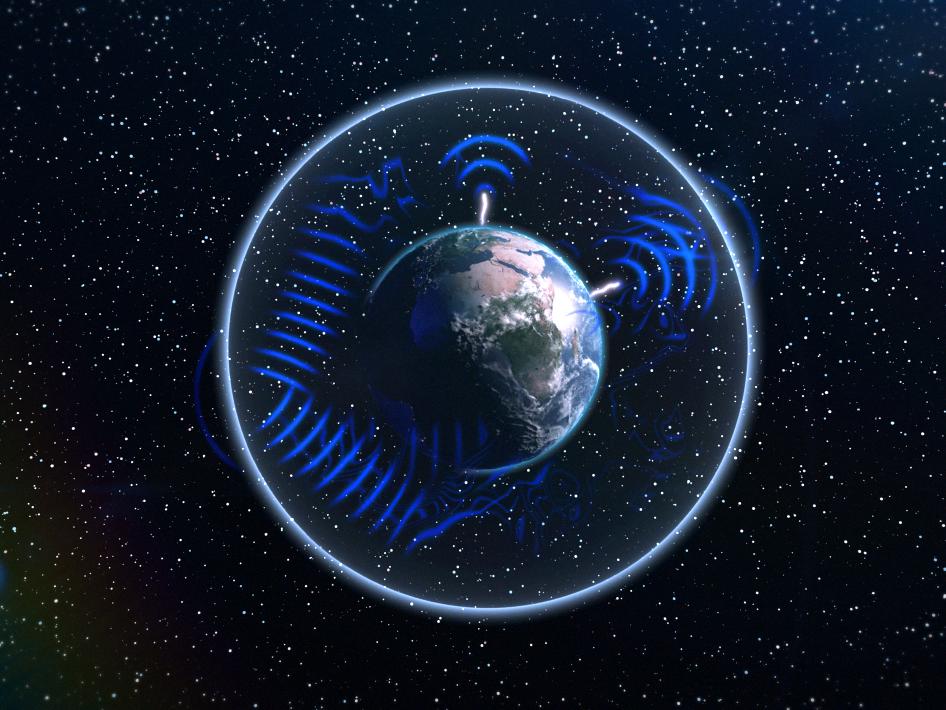 Schumann ResonanceAt any given moment about 2,000 thunderstorms roll over Earth, producing some 50 flashes of lightning every second. Each lightning burst creates electromagnetic waves that begin to circle around Earth captured between Earth’s surface and a boundary about 60 miles up. Some of the waves – if they have just the right wavelength – combine, increasing in strength, to create a repeating atmospheric heartbeat known as Schumann resonance. This resonance provides a useful tool to analyze Earth’s weather, its electric environment, and to even help determine what types of atoms and molecules exist in Earth’s atmosphere.The waves created by lightning do not look like the up and down waves of the ocean, but they still oscillate with regions of greater energy and lesser energy. These waves remain trapped inside an atmospheric ceiling created by the lower edge of the “ionosphere” – a part of the atmosphere filled with charged particles, which begins about 60 miles up into the sky. In this case, the sweet spot for resonance requires the wave to be as long (or twice, three times as long, etc) as the circumference of Earth. This is an extremely low frequency wave that can be as low as 8 Hertz (Hz) – some one hundred thousand times lower than the lowest frequency radio waves used to send signals to your AM/FM radio. As this wave flows around Earth, it hits itself again at the perfect spot such that the crests and troughs are aligned. Voila, waves acting in resonance with each other to pump up the original signal.While they’d been predicted in 1952, Schumann resonances were first measured reliably in the early 1960s. Since then, scientists have discovered that variations in the resonances correspond to changes in the seasons, solar activity, activity in Earth’s magnetic environment, in water aerosols in the atmosphere, and other Earth-bound phenomena.