Ionizing radiations produce deleterious effects in the living organisms and the rapid technological advancement has increased human exposure to ionizing radiations enormously. There is a need to protect humans against such effects of ionizing radiation. Attempts to protect against the deleterious effects of ionizing radiations by pharmacological intervention were made as early as 1949 and efforts are continued to search radioprotectors, which may be of great help for human application. This review mainly dwells on the radioprotective potential of plant and herbal extracts. The results obtained from in vitro and in vivo studies indicate that several botanicals such as Gingko biloba, Centella asiatica, Hippophae rhamnoides, Ocimum sanctum, Panax ginseng, Podophyllum hexandrum, Amaranthus paniculatus, Emblica officinalis, Phyllanthus amarus, Piper longum, Tinospora cordifoila, Mentha arvensis, Mentha piperita, Syzygium cumini, Zingiber officinale, Ageratum conyzoides, Aegle marmelos and Aphanamixis polystachya protect against radiation-induced lethality, lipid peroxidation and DNA damage. The fractionation-guided evaluation may help to develop new radioprotectors of desired activities. 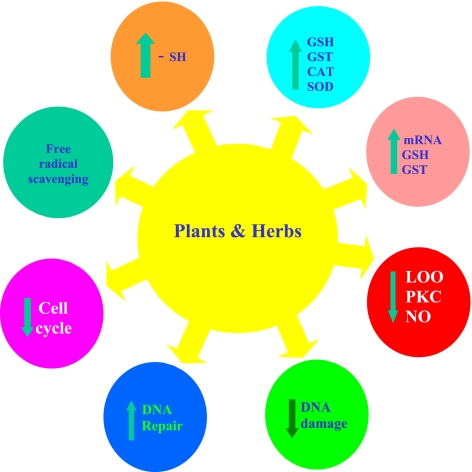 Source: Radioprotective Potential of Plants and Herbs against the Effects of Ionizing Radiation

The many uses of the HEMP/CANNABIS plant include much more than the relaxing euphoric feeling caused by THC. Paper, fuel, rope, plastic, and countless other uses have been identified.

However one of the attribute you may not have heard about is the cannabis plant’s ability to absorb nuclear radiation.

Hemp was actually used in the cleaning up of Chernobyl, similar to the sunflower plants. Thus for the recent nuclear disaster in Japan, cultivation of hemp is a viable alternative since this plant absorbs the radiation. It is also viable to other places with regards on the laws of the states and the country that is going to be planted. END_OF_DOCUMENT_TOKEN_TO_BE_REPLACED