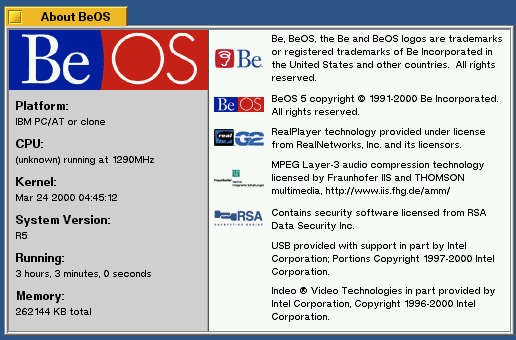 The last official version of BeOS would be its most solid yet.

Here we are, after revisiting three versions (3.1, 4.0, and 4.5). We’ve now arrived at the last official release of the BeOS: R5, nicknamed “Maui”. And by far, out of every release, R5 was the most popular as it had went Platinum. Seriously. Picture “over one million copies… downloaded in the first month” and “over four million CDs” according to an Internet Archive Be press release: Be Goes Platinum with BeOS R5, and that should provide an idea of the popularity of Release 5.R5 also solidified the foundation from 4.5, and thanks to the BeOS R5 page on Wikipedia, we can see it mentions R5: “Improved POSIX compliance, particularly in the area of networking” and that “the OS in general was moved towards the new modular media kit over the former audio-only sound subsystem.” Another tidbit that is interesting to note about R5 is that the same page indicates it had been “seeded to developers as ‘R4.6′,” and if so, this would mean 5.0 was probably considered to be an upgrade to 4.5 in its heart and soul.

This entry was posted in Software and tagged BeOS. Bookmark the permalink.