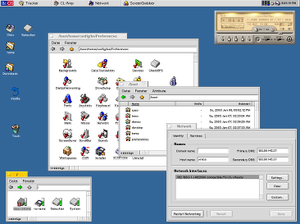 BeOS is an operating system for personal computers first developed by Be Inc. in 1991. It was first written to run on BeBox hardware. BeOS was built for digital media work and was written to take advantage of modern hardware facilities such as symmetric multiprocessing by utilizing modular I/O bandwidth, pervasive multithreading, preemptive multitasking and a 64-bit journaling file system known as BFS. The BeOS GUI was developed on the principles of clarity and a clean, uncluttered design.

The API was written in C++ for ease of programming. It has partial POSIX compatibility and access to a command-line interface through Bash, although internally it is not a Unix-derived operating system. END_OF_DOCUMENT_TOKEN_TO_BE_REPLACED